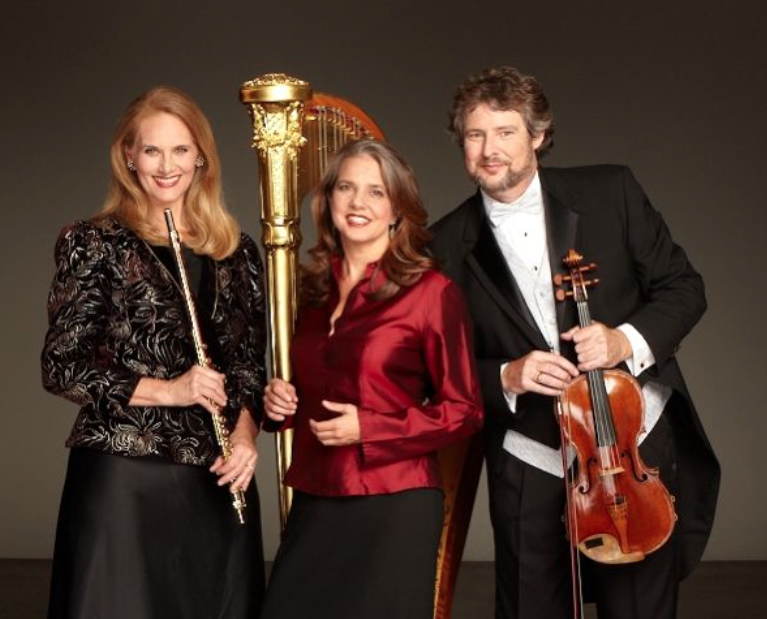 
"A violist with beautiful tone, abundant musicality and a star-powered temperament."

"All are strong players with chops to burn, and Williams is a violist with a beautiful tone, abundant musicality and a star-powered temperament."

The Allegro Chamber Trio brings to its audiences the lovely tone colors of the rarely heard combination of flute, viola, and harp. This alliance of instruments has been authenticated by the master Impressionist Claude Debussy. For twelve years the Trio has toured the US. They can be heard in Sir Arnold Bax's Elegiac Trio on their CD, Centaur label, titled Debussy · Ravel · Bax. The Trio's interpretation of Debussy's Sonata has been featured on National Public Radio's Performance Today.

First prizewinner of the National Flute Association's Chamber Music Competition, Megan Meisenbach has toured internationally and in 26 states as a soloist and chamber musician, and has recorded works from the standard repertoire as well as given 10 premieres. The New York Times hailed her sold-out Carnegie Hall debut performance as "assured, forthright, with a clear appealing flute tone; Megan Meisenbach's interpretations had an air of authority and invariably commanded respect.” www.harpfluteduo.com

Bruce Williams is principal violist for Austin Symphony Orchestra, the Mozart Festival Texas Chamber Orchestra in San Antonio, and the Victoria Bach Festival where he is often featured as a chamber musician and soloist. He is on Harmonia mundi recordings of the Grammy nominated vocal ensemble Conspirare and frequently performs live with this group. Mr. Williams is also a founding member of the the Mason County Chamber Music Festival where he serves as Artistic Director. He is also a founding member and manager of the Artisan Quartet who played at Carnegie Hall in 2012, presented "Genius at Play, the complete quartets of Beethoven", and has presented the "Artisan Quartet Series" in Austin five seasons and counting. www.artisanquartet.com

Elaine Barber is Principal Harpist for Austin Symphony, a regular guest with San Antonio Symphony, and former Principal Harpist for Mississippi Symphony and Mississippi Opera. She has been a featured soloist at the American Harp Society National Conference, and with Austin Symphony, Louisiana Philharmonic, Mississippi Symphony, and Chamber Soloists of Austin. She has recorded for the Naxos, Nonesuch and Matador labels, and has premiered solo and chamber works by James Sclater, Peter Stopschinski, Charles Rochester Young and P. Kellach Waddle. Her solo playing has been called "spellbinding," electrifying," "simply gorgeous.” www.elainebarber.com